When You Really Should Not Trim A Tree Yourself

The average homeowner is capable of trimming the average tree, so long as they have the right tools and are are sparing with their removal efforts. However, there are some trees that you should definitely not attempt to trim on your own. If any of the following are true of your tree, then you really should call a professional tree trimmer.

Your tree is near power lines.

Many people have their trees trimmed because the trees are reaching into power lines. But as common as this problem is, it's still very risky. You need to not only avoid hitting the power lines with any tree branches, but also with your ladder and other equipment. Tree trimming companies know how to do this safely. In some areas, companies even need a permit to trim trees within a certain distance of power lines, and the municipality probably won't give that permit to a private homeowner.

Your tree is diseased.

Does your tree show any symptoms of disease, such as spots on the leaves, lesions on the branches, and brackets growing out of the trunk? If so, you should have it professionally trimmed. It can be hard to determine which wood is healthy and should stay in place and which wood is unhealthy and needs to be removed. You also have to be careful to use top-notch sanitation practices to avoid contaminating healthy wood. A tree care professional will know exactly how to do all this, which is what you want when your tree's life is on the line.

Your tree overhangs your roof.

Trees that overhang roofs definitely need to be trimmed. Otherwise, the branches may fall on the roof during a storm. But it can be hard to make sure the branches don't fall on the roof and cause damage when you're trimming the tree! Trimming companies have special equipment they can use to grab onto branches and pull them up so they don't hit the roof as they fall. They'll also know which branches to remove and which ones don't really pose a threat. You don't want to leave a branch behind and later find out during a storm that it was actually a threat.

If your tree is diseased, growing into power lines, or growing over your roof, then you need to have it trimmed by professionals. It's just not worth the risks for you to do it yourself. Contact a company that offers tree trimming services to learn more. 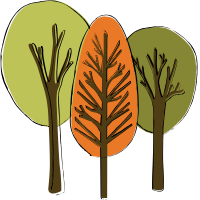 Where would the world be without trees? We certainly would not be here, as trees produce most of the oxygen we need to breathe. If you happen to have trees on your land, then they deserve your respect and care. Of course, caring for such a large plant can be difficult if you don't have the right equipment or know-how. That's where tree services come in. They can trim trees, remove damaged trees, diagnose pest problems, apply fertilizers and water, and more. Keep reading the articles here to learn more about the majestic trees and the people who care for them.